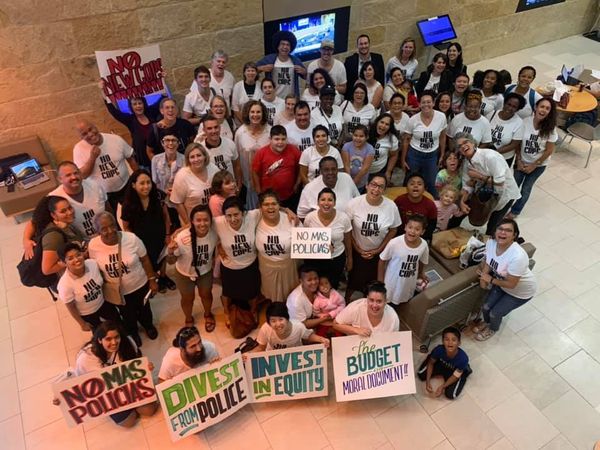 Every year, we invite Austin’s creative community to come together and discuss how design-thinking can affect positive change in our communities. We realize that ADW’s events are often the start of a conversation, the inspiration that spurs action, but it takes local organizations advocating year-round for equity to make real change in our communities. That’s why this year, as part of our commitment to build an inclusive, anti-racist community, we’ll be highlighting the work of Communities of Color United for Racial Justice (CCU), a local BIPOC-led coalition that advocates for racial equity, public health, and police divestment. We’ll also be donating 25% of this year’s hosting fees to CCU to support their mission.

Launched in 2014 by several BIPOC-led community-based organizations, CCU formed during a time when Austin was experiencing rapid growth and, in turn, becoming one of the most economically segregated cities in the country. Austin was repeatedly being touted as “the best place to live,” but CCU wanted to challenge that narrative by addressing the racial divide and inequities that stemmed directly from the city’s segregationist history and inequitable growth.

The organization’s work focuses on advancing racial justice in Austin, specifically through the lens of racial equity. CCU does this by pushing for structural changes within the city’s budget each year, with their main focus being on the divestment of police budget funds and allocating those funds to what they call R.E.A.L. (RISE Funds, Equity Office, Austin Public Health and Low-Income Housing) Solutions.

In May 2015, CCU helped pass a resolution (Resolution #20150507-027) at Austin City Hall that designated the city government to focus on the work of advancing racial equity in Austin. This resolution was a direct result of a report that the coalition put together titled: “Austin - A ‘Family-Friendly’ City: Perspectives and Solutions from Mothers in the City.” This report challenged Austin’s designation as a “family-friendly” city by citing the growing inequities families were facing. The report also recommended the city implement an Equity Assessment Tool, a crucial tool in evaluating the impact that existing city policies and practices have on race and socioeconomic-based equity.

More recently, in response to the pandemic, CCU launched a mutual aid network to support vulnerable members of the community who have less access to resources and are disproportionately affected by COVID-19. The network, CCU-RESN (Racial and Economic Solidarity Network), has distributed over $80,000 to community members so far.

Through their initiatives, CCU is not only addressing the city’s racial divide and presenting solutions, but they’re building solidarity across communities of color.

Here’s how you can support CCU’s work: