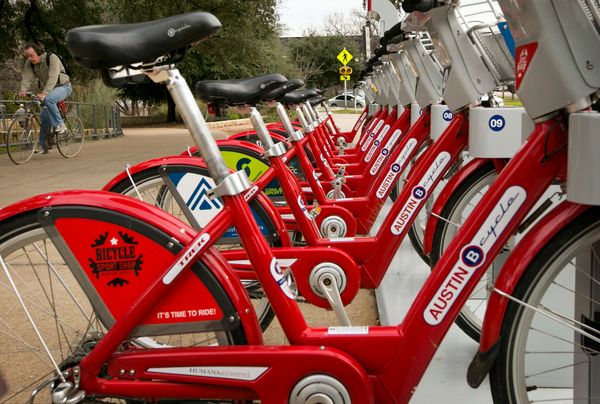 We knew early into planning that an event with a packed schedule in a packed city like Austin needed to help its attendees get around. So, we were lucky enough to find Austin B-cycle, a public bike share system owned by the City of Austin and operated by the local 501c3 non-profit Bike Share of Austin.

“If we can provide a solution to a problem for local Austinites looking to increase Austin’s ranking in the design world, then yeah, we’re happy to do it,” said Tim Willingham, Marketing and Events Manager for Austin B-cycle.

David Orr, Bike Share Program Manager for the City of Austin, even hopes some time on the bikes during the week could even spark some design brainstorming.

“Jumping on a B-cycle will make it easy for people to get from event to event and get even more great ideas on how to make Austin, and the world, a better designed environment,” he said in an email.

How you can bike for free

Use promo code ADW2018 at Austin.bcycle.com for an Explorer Day Pass, which allows you to ride around Austin at no cost anytime from November 5th-9th.

With dozens of bike stations across the city, Austin B-cycle provides more than just transportation: They also bridge the gap between brands and people with in-person marketing. A couple of their partners include entertainment media companies like Netflix and Showtime.

These partners will post ads at their stations, and sometimes even work with B-cycle on experiential marketing campaigns. For example, at SXSW last year, B-cycle and Showtime handed out swag bags to riders and even brought in actors from the TV show Shameless to talk to fans.

...but they still execute on their core mission pretty darn well

When the City of Austin received a grant to increase alternative transportation (which mostly meant bicycles) by 1-10%, they stumbled into a convenient coincidence: B-cycle was about to launch a program with the University of Texas at Austin.

The city decided to fund the program, which launched in February 2018. Every student can sign up for a free membership, and 33% of the student body already has.

“Every single bike on campus is getting ridden around 11 or 12 times a day by a student,” Tim said.

Students on UT’s campus take a total of 1,000-2,000 trips every day. Needless to say, B-cycle helped the city meet the original goal in no time.

What’s next for Austin B-cycle?

In October, they released 10 electric bikes into the city, and plan on pushing out an entire fleet in the next year or two. Electric bikes keep the mechanics of conventional riding, like pedaling, and make things like hills a whole lot easier to endure. That means more people might be willing to use a bike as a mode of transportation, because they allow a rider to expend less energy.

Most importantly, though, they’ll have you as a rider next week!